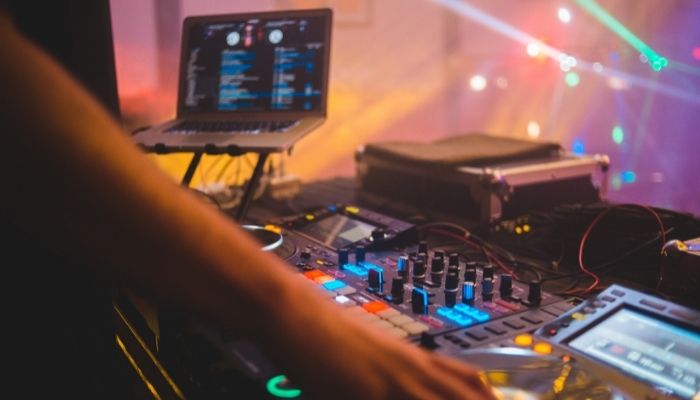 For vocalists performing live, in-ear monitors are a must-have device. A noisy atmosphere creates by instruments, speakers, and a roaring crowd.

Due to the extreme noise levels, it is challenging for a vocalist to hear oneself during a performance, if not unattainable. These monitors enable vocalists to listen to themselves and the music clearly, performing more effectively.

Historically, artists had to depend on stage monitors to understand what they were performing during a performance. These wedge-shaped speakers are angled away from the band, preventing the audience from hearing them over the loudspeakers.

However, wedges can present a slew of complications to your set, ranging from stage clutter to ear damage due to excessive volume levels.

However, with In-Ear Monitors, none of these concerns applies. As a result, IEMs have become the de facto standard in live music.

Primary Components Required in Setting Up an in-ear Monitor.

Before you begin, it’s necessary to know four significant components to Set UP In-Ear Monitor System?

A mixer, alternatively referred to as a mixing board, is a component of audio equipment that enables users to adjust the sound to their satisfaction.

The mixer uses to connect all of the various audio components. It functions as a “central hub” for adding and adjusting sound effects, ambient, and other audio.

The mixer reduces the number of outputs by combining audio components. Analog and digital mixers are available in various configurations, including full-size and tiny models.

Transmitters communicate with the receiver by transmitting the mixer output to the monitor mix. You will only require one transmitter if you use a typical monitor mix.

Musicians who utilize a customized monitor mix adjust the volume of their voice or instrument while leaving the rest of the band’s sounds in the background. Hearing oneself more clearly enables them to stay on time with their part and sync with the rest of the band.

The receiver intercepts and transmits the wireless audio signal to the in-ear monitor. It carries a belt pack connected to a belt, jeans, guitar strap, or pocket. Loudness knobs saw on receivers.

They are used to alter the volume of the audio play. Each in-ear monitor includes a receiver. Unless they utilize a plugged system directly into the mixer, each performer will require a belt pack.

The artist uses the in-ear monitor (IEM) to listen to the monitor mix and drown out distracting background noise. Noise cancellation enables the musician to hear the song more clearly, regardless of the audience, instruments, or other ambient noise.

In-ear monitors, like standard earbuds, fit snugly in the ear canal. Some artists even have their items custom-built to ensure the optimum fit.

Why Do People Want to Use in-ear Monitors?

Following are the reasons why people want to use in-ear monitors.

In two distinct ways, the usage of an IEM system benefits artists. First, if you are a vocalist, you will notice a significant improvement in pitch control because you will no longer listen to yourself through your stage wedge.

Additionally, there will be no distractions from the drummer playing excessively loudly or from any other noise that can divert your concentration.

You no longer need to stand in one area to hear all of your colleagues, especially a vocalist or electric guitar player. Wherever you move, surveillance will always be present.

This level of independence is enhanced even more if you have a reliable wireless system. This advantage enables you to be a little more inventive in your stage use. You can jump, run, or jump in whatever direction you like; the sound must always follow you.

Protecting your ears as a musician is important. However, loud music is part of the entertainment. Almost everyone has a day or two of ringing in the ears after a performance.

Imagine the damage exposure to such volume night after night may do to your ears. It’s easy to understand how IEMs can relieve eardrum pressure by lowering the number of speakers on stage and background noise.

While wired in-ear monitors are simple to set up, they restrict movement. Certain drummers and keyboardists use these monitors because they are not required to move around frequently.

The advantage of connected in-ear monitor systems is that they reduce the necessity for a receiver, minimizing interference.

Transmitters and receivers function in tandem in these monitors; hence, many advanced systems set them to the same frequency to avoid interference and assure sound quality.

The fit is the most crucial aspect of in-ear monitors. A proper fit can differentiate between the substandard audio output and crystal-clear, high-quality music. We’ll go into greater depth about each fit below.

Universal earpieces are a viable option for individuals on a tight budget. These are one-size-fits-all earpieces. Regrettably, generic in-ear monitors do not have a good fit warranty.

The right fit can significantly improve sound quality and ear protection. That is why a large number of performers opt for custom-moulded in-ear monitors.

When funds permit, customized in-ear monitors are appropriate. These are of higher quality and are custom-moulded to fit each individual’s ear.

They form an airtight seal, increasing their comfort and enabling excellent noise cancellation.

How to Configure the in-ear Monitor System?

After selecting the appropriate in-ear monitor and ensuring an optimal fit, you’ll want to configure the microphones and devices. Possessing a working knowledge of sound devices will aid with setup.

Specific in-ear monitor systems are pretty complex. Cables, inputs, outputs, and mixing are all different. The configuration will determine by the equipment and the number of custom monitor mixes.

The steps mentioned below to Set UP In-Ear Monitor System.

Tips for Easy Configuring of the in-ear Monitor System

Several tips for Setting UP In-Ear Monitor System include the following:

When compared to analogue mixers, digital mixers are more complicated and require more setup steps. Bear this in mind as you configure your system.

They will need an internet connection, so see your manual for configuration instructions specific to your device.

When utilizing a wired transmitter, do not compromise on extension cables and permanently secure the cords with tape during performances. Nothing is more annoying than a loose headphone cord during a performance.

What Do Musicians Listen to in Their Earpiece?

Musicians wear in-ear monitors (IEMs) to improve their hearing and monitor their performance on stage. Additionally, it enables people to listen to an unheard music track and click record.

Are in-ear Monitors Worth It?

If you’re considering switching to in-ear monitors, there are numerous aspects to consider. Nonetheless, the performers at Sweetwater believe that it is necessary for the audience and your performances and hearing protection.

How Much Do in-ear Monitors Cost?

A good pair of general-fit in-ear monitors with a single driver will cost between $100 and $200, and moulds start at around $300.

When all of the benefits of In-Ear Monitors consider, it’s easy to see why they’re quickly becoming the industry standard for live music.

You’ll discover that you can set up more quickly, perform more effectively, and even sound much better to your fans. In-ear monitor setup is straightforward, even for people with the limited audio experience. Connect all audio sources to the mixer.

After this, connect the mixer’s audio output to the transmitter. Then The transmitter provides the audio signal to the receivers, which transfer it to the in-ear monitors. I’m hoping that after reading this guide, you’ll be able to Set UP In-Ear Monitor System.